Not so much a primary as a gliding role

In Erkner, a town dotted with lakes in the south eastern suburbs of Berlin, water has always had an important role. In a list of inhabitants in 1822, two thirds of families named boatman as the occupation of their family's breadwinner. In 1842, the Berlin-Frankfurt railway was created with a stop at Erkner. The following year this was already expanded to a train station due to the high popularity from Berlin excursionists. Then day trips became another source of income.

Water and railway: In April 2009 both of these factors play an important role once again in Erkner. This time it has a lot less to do with fishing or summer visitors. As a matter of fact, Deutsche Bahn's infrastructure needs to be updated: A double-tracked railway bridge on the Berlin Ost - Frankfurt Oder line which runs over the Flakenkanal in Erkner needs to be replaced. The old timber-framed bridge which is roughly 60 meters long has rusted and restoration is too costly.

Measuring 58 metres, the new arched bridge lies on the green lawn directly next to the canal on this sunny April's day, waiting for embarkment. And this is where the real challenge of the 60 ton steel framework lies. While only a few metres away the train traffic - in the meantime running on a single track - is operated via the old frame bridge, the manufacturer Stahlbau Plauen from Vogtland together with the Eisenhuth installation engineers from Dortmund have secured the contract for erecting the new bridge over the canal in parallel and just a short distance away.

In 1997, the team of experienced installation engineers focused on moving heaviest load under the supervision of Eckhard Eisenhuth. Such as the disassembly and assembly of brewery installations, the assembly of steel and concrete prefabricated buildings and the lifting of platforms in underground railways. In particular, the assembly and disassembly of concrete and steel bridges is one of the engineers' speciality, as so happened at the start of 2009 in Neuss where a railway bridge was transported via the local inner harbour.

Despite all of their experience: The planned gradual displacement process is an enormous undertaking. Eisenhuth is using a pontoon for transport which, floating on the canal, temporarily has to carry a weight of 400 tons. For this purpose, the Dortmund engineers have developed a special construction: On the nine and a half metre wide and 65 metre long pontoon which was formerly used to transport troops of the National People's Army with a bearing capacity of up to 1000 tons, there are two 20 foot containers, on which in turn a steel construction is posed. Its upper border forms four two and a half metre tall and 75 centimetre wide plastic sheets made of the Original Material "S"® plus + LF produced by Murtfeldt.

The contact between Eisenhuth and Murtfeldt resulted from joint projects in Dortmund. The successful cooperation prompted Eisenhuth to also use Murtfeldt plastics for this project, a company known for being specialists in the manufacturing and processing of slide profiles, chain and belt guides, chain tensioners and individual machine parts from low-friction synthetic materials.

The solution: Highly-technical plastic by Murtfeldt with a tailored design


The specially equipped pontoon should now bear the weight of the bridge which is already partly overhanging the canal. A passive task as the pontoon only serves as a further support for the bridge. The bridge is actually pushed forth from the edge of the bank with a hydraulic cylinder onto the pontoon. In addition, Eisenhuth fitted the steel construction on the pontoon with two hydraulic cylinders for power transmission by means of tension rods which are fixed to the bridge. With the help of this semi-hydraulic press, at full power the pontoon can be pushed back against the direction of thrust.

At this point the Original Material "S"® plus + LF takes not so much a primary but more of a gliding-supportive role. This brand new, self lubricating material should make the displacement easier thanks to its low-friction properties. Add to this some soft soap to help initiate movement.

It is exactly this process that can be seen early in the morning on this sunny April day. While above and on the bridge the last few manoeuvres are being carried out for the displacement, a push boat pushes the pontoon towards the bridge. Then the pontoon is flooded with 800 tons of water until it is positioned deep enough so it can be manoeuvred under the bridge which is half perched over the canal. Once under the bridge, the water is drained once again - known in the trade as deballasting. The pontoon loses weight and slowly rises. Until the bridge is resting on the steel construction on the pontoon.

So that during this procedure the pontoon does not hit the old railway bridge via which active train traffic operates in the meantime, it is secured with four painters to both edges of the bank, where it remains fixed during the further displacement.

This is where the tricky bit begins: The bridge is displaced onto the pontoon. The hydraulic cylinder slowly starts out and increases its force to the maximum to overcome the enormous static friction. The bridge starts to move, slowly sliding in the direction of the target bank. After a few meters it comes to a standstill. The way to the other bank is long and requires much effort as the bridge can only be pushed to a certain point. After that, the pontoon under the bridge is pushed back in the direction of the exit bank in order to define a new support point. This process continues until the bridge has reached the provisional support bearing at the other bank.

The sun trails away towards the west and dusk slowly falls. And at the end of this gruelling day the work is done. The bridge has reached the other bank where it is safely anchored. Once again, the pontoon is flooded until the bridge no longer rests on it. The push boat pulls the pontoon from beneath the bridge and transports it to its home port for a well deserved rest after a long day's work.

Download this case study from our server as a PDF file.

All information provided as downloads is in PDF format. To display it, you require free Adobe Reader software. If you have not already installed this software, you can download it here. 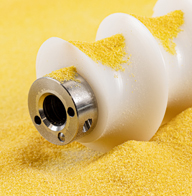 Overview of all news

Currently there are no trade fair dates